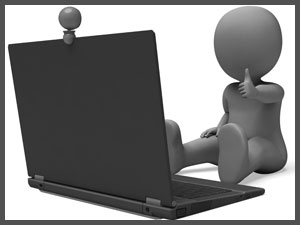 Troubleshooting Your Laptop webcam usually requires some research on the vendor’s site.

The webcam worked when running Windows 7 but failed later on when it was upgraded to Windows 10 in October 2015.

Client is in a remote location so we don’t have physical access to the machine.

Laptop had issues with Windows 7 so it was an easy decision to upgrade to Windows 10. The assumption was that the laptop had malware.

Webcam had worked at some point under Windows 7 but the laptop.

It’s unclear how much time has passed since the webcam worked but the Windows 10 upgrade was done in October 2015 (8 months ago).

We were able to connect to the laptop remotely and review the problem as well as create a live USB drive to boot into Ubuntu.

As expected, the webcam was not found when running camera.

The unusual part was that it was not listed in Device Manager under Imaging devices and nothing was flagged as not working or listed in Other.

Our 1st inclination was that we needed a driver but found no reference of drivers for the webcam on Dell’s support. Apparently the laptop uses Windows drivers.

We updated BIOS & chipset but that had no effect.

It’s usually wise to get a view of the machine from a neutral Operating System.

We could have created a live Windows 8 or Windows 7 disk but  this is not as simple to do as creating a live Ubuntu disk.

Using a live Operating System (O/S) doesn’t require you to install anything but rather boot into the O/S on some sort of removable media.

In our case, we used a USB drive.

Ubuntu has a Try feature that runs off the drive without impacting your current O/S.

We often use live O/S to recover files from a broken Windows O/S.

Within Ubuntu we could open a terminal window (CTRL-ALT-T) and invoke the webcam via cheese.

The camera was not found with cheese either so it appears that the camera is broken somehow. maybe a loose connection.

In our sample case, the Dell laptop was diagnosed as having hardware issues since it exhibited the same problems using another O/S.

Our recommendations were to use an external webcam supported by Windows 10 or have the laptop repaired.

Since the laptop is a few years old it’s probably best to use an external camera. An external probably has better specifications and it’s designed specifically for Windows 10.